In less than 5 hours, this fake ranking site got over 2500 Princeton students talking about it for weeks.

On April 2019, a mysterious website called TigerRank was launched. It was allegedly a "new, convenient way to view the definitive rankings of all students at Princeton University". It was a webpage where, after logging in with your student account, you were presented with every single undergraduate student names, in some "ranking" with no context. In reality, of course, it was nothing more than a random ordering of names of all student at Princeton.

The mystery behind it though was enough to lure 2500+ Princeton students (about half of the undergraduate population) in a matter of around 5 hours. The website received over 5000 unique sessions the day it was launched, initially from Princeton and later from other parts of the USA.

The project was a product of the wonderful minds at TigerMag⁠—one of America's oldest college humor magazines. My role, as the Head of Web at TigerMag, was to bring it to life as part of our new segment of tech pranks.

Beyond just getting everyone confused and curious to learn what this was all about, the website became a subject of many jokes and discussions, from memes to college confession posts. 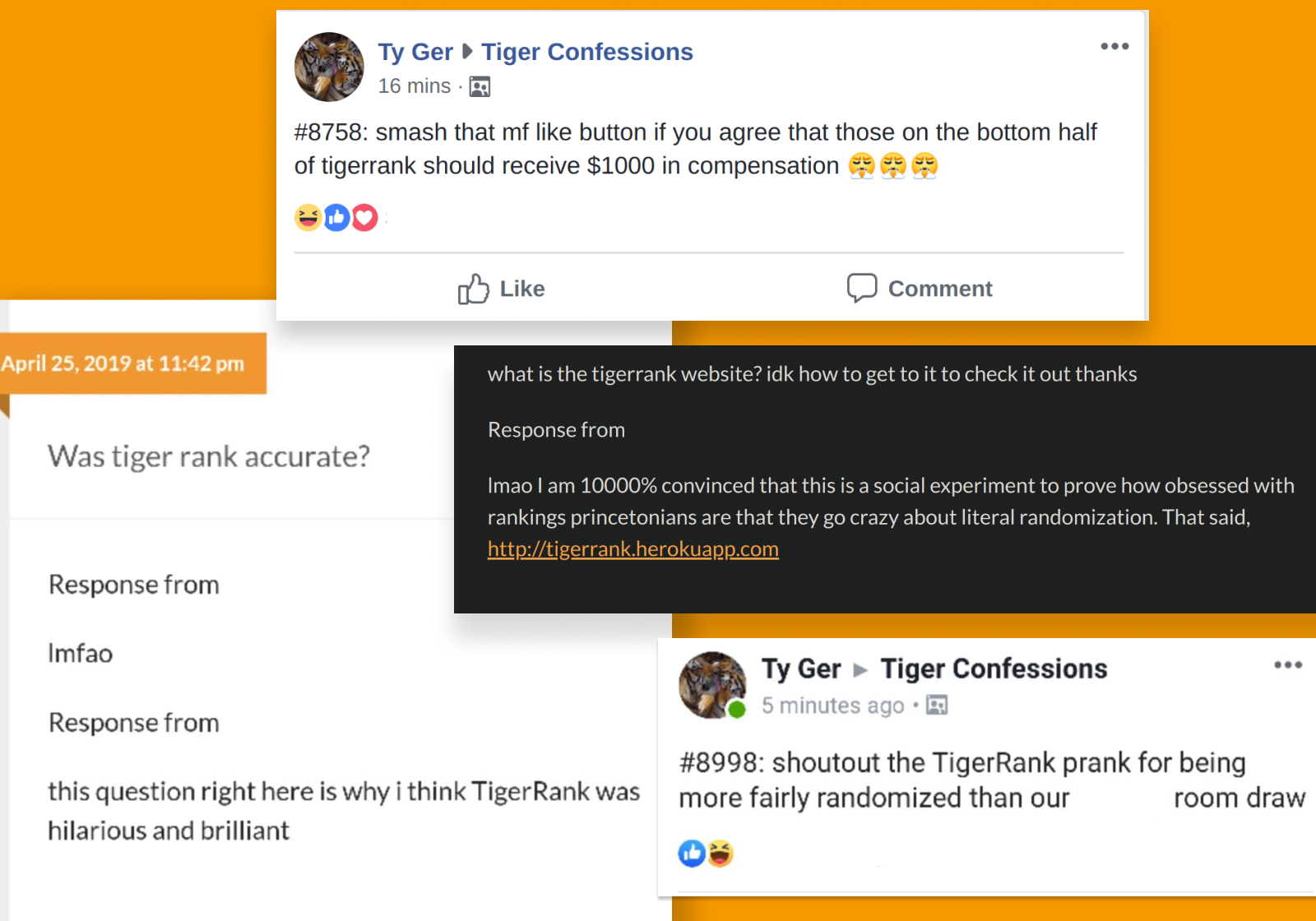 A friend of mine told me "I cannot believe the website was up for only a couple of hours. I thought it was weeks".

While working on a project like this, we made measures to make sure no one is negatively impacted by our little creation.

The lowest ranking student: as being ranked the lowest in a bogus ranking might be too much for many people, one of the editors of TigerMag was permanently assigned to be the last and take the bullet for the team.

A complaint system: There was an option to "Submit complaints" which allowed you to describe any issues you would have with the website. If you submitted the complaint though, you would get an animation of your current rank being dropped by over 150. People with legitimate complaints and concerns would often complain again just to say "okay this is very funny".

An FAQ: at the very bottom of the website we had an FAQ, addressing questions like "What does my ranking mean?" with vague and unhelpful answers like "Higher is better".

We hoped this would address people's concerns and also allows us to deliver some jokes through the platform.

I was not expecting this, but some people started actively trying to exploit some features of the website. This included spamming complaint requests, script injection attacks, and more. I had to respond by quickly updating the platform and adding features like request timeouts and complaint limits. A lot of people wanted to be at the bottom of the ranking and were disappointed to find out that was impossible.

The most common way people tried to "hack" the system was through an intentional design "flaw". To file a complaint, you had to fill out your username and the complaint message. After which, you'd see your rank get dropped as a punishment. After seeing this, people would often try to complain, this time writing the username of their friend in an attempt to drop their rank. But the system would drop their rank again as the username field was actually bogus.

You can see all the features of TigerRank on its original website: tigerrank.herokuapp.com. As it no longer requires a Princeton student account to access it, it has been filled with fake, randomly generated names for demonstration purposes. It also does not update any of its server-side information.

You can check the code behind this on the Github repository here, which will allow you to create your own version of TigerRank, if you ever desire to do so for whatever reason! If you do, please use it responsibly—as innocent as a list of names can be, it is still private information and one should do its best to keep safe.